The strange story of the disappearing eclipsing binary star systems begins with forum Talk members troyw and Kian Jek's comments on KIC 7955301. Here is what Troy had to say:

KIC  7955301 was added by request to AKO (Amateur Kepler Observatory) and also referenced here in another TTV/EB thread. An incredible image is produced for this star. ~15.34 days you can see the primary eclipses, secondary eclipses, TTVs and an evolving orbit all in one. Have a look at the TTVs in particular. You can see how the sine wave nature of the primary and secondary eclipses are slightly offset. I thought a secondary eclipse would show either the same phase of sine wave, or 180 degrees out of phase. This seems to be out of phase by 15 or 20 degrees. Not only that, but there is trend in primary eclipse line that is different than the secondary. I am not sure how to describe it, other than overall angle of the primary transit line is different than the overall angle of the secondary eclipse transit line.

The blue lines show the difference in transit line angles. Is this an effect of the evolving orbit? Or a larger TTV mixed with the smaller ones? Here is the star on AKO, lined up to 15.34
http://www.extrasolar.us/AKO/Kepler.php?KID=7955301&period=15.34

I had meant to take a good look at this star for some time now ever since it was mentioned in Slawson et al:


At the time of this writing, about half of the sample has been completed. The O-C diagrams were inspected visually, and eight cases where the O-C diagram has a significant signal through Q2 were identified, see Figs. 4 and 5. KID5771589 and KID7955301 have changes in their O-C diagrams of more than 100 minutes. Most of the others have changes of 20 to 40 minutes. It seems unlikely that such large changes in the O-C diagram over such short times (≈ 125 days) can be caused only by light travel time effects. We also note that the timescale for apsidal motion is much longer than the variations seen here. Hence, each of these EBs is most likely interacting with a third body.

As we now have up to Q11 data for this star, the change is much greater than 100 minutes. But there are more interesting things here. A plot of the combined light curve shows that the orbit is evolving in inclination:

The red and blue dots mark the extrema of the primary and secondary eclipses respectively, and curves fitted. The curve-fits seem to indicate that the eclipse depths could have maxed out and perhaps in future quarters we might see the depths recede again? A phased plot of the detrended light curve using Prsa v3's period of 15.32634, shows a clean fold:

It's when you zoom into the primary and secondary eclipses that you see the effect of TTVs clearly: Here are curve fits to both of them:

The primary eclipse O-C was fitted with a sine curve.

For the secondary eclipses, a cubic-spline fit does a better job. There is a kink just past each local maxima. a similar kink can also be seen in the primary eclipse O-C. This is a very interesting system. There are no APOs, the shallowness of the eclipses are due to the low inclination of the plane of the orbit of the two stars, resulting in grazing, partial eclipses. However, there's much more. I detrended the entire LC and what emerges appears to be decreasing eclipse depths. This suggests an evolving orbit with the inclination changing with time:

In fact, if one extrapolates the slope of the eclipse line, we find that the eclipses may well disappear by Q12, 346 days away!

There are obvious TTVs (or ETVs if one wants to be pedantic) - if I take the published period and fold the LC to see the primary and secondary eclipses, here's what you get: There appears to be something perturbing the orbits of the components of this eclipsing binary. Perhaps a third stellar object, fairly massive but not in our line of sight.Plotted the O-C for the secondary eclipses, overlaid on the O-C for the primary eclipses. The Secondary O-C is skewed, but has the same periodicity as the primary. If the precession of the plane of the orbits is due to a third body, the shape of the evolution of the eclipse depths may not not be linear but follow a sinusoidal curve. The eclipses may not disappear, but instead decrease to a minimum and then start increasing again. Or something like that.


troyw:
Will this star system continue on its course and complete a disappearing act?
Or.. will a hidden body fling this dancing duo back into the spot light for another chance to be seen?!

First mentioned in Slawson et al, KIC 10319590 was noted to have ETVs in excess of 20 minutes. But that was many quarters ago and the data they had was from Q0 to Q2. So out of curiosity I downloaded the light curve and took a look and this is what I found:

Not only is this an evolving orbit, but what's remarkable is that due to precession it is changing in inclination at different rates, including bursts of rapid change, so by the middle of Q6, the two stars finally left our line of sight and stopped eclipsing each other. The O-C plot shows interesting periodicities that appear to be correlated with these inclination changes - the inclination (and eclipse depth) changes faster when the ETVs (Eclipsing Timing Variations) appear greatest:

The period of the ETV variation is approximately 383 days. Will the eclipses reappear? If I'm assuming that the precession will lead to a complete rotation of the plane of the orbit, then yes. But when? A simple model of this system shows that with a period of 21.3d, the separation and relative sizes of the two stars will cause it to disappear from line of sight at an inclination of 87.5°. Since we are not sure what the inclination was at the start of the observed light curve, let us assume that it starts at 90°. So the rate of the precession will be roughly 2.5° every 400 days.

The plane of the orbit will have to return to 87.5° in the opposite direction for eclipses to reappear, i.e. it will have to rotate 175°. So 175/2.5 = 70 * 400 = 28000 days or approximately 76.6 years. Also, 400 days is a lower bound, so it's probably longer than that. I don't think we'll be around to see the eclipses reappear unfortunately. However, since the orbit of the third object is also being perturbed by presence of the close binary, it's possible that at some point its own precession will bring it into eclipse with one or the other of the binary stars.

Did you read that correctly? An eclipse return date of approximately 76.6 years!

I thought I'd just download the new Q7-9 data for 5653126 to see how it's turning out and just as Robin said, secondary eclipses have started appearing in Q8 - the inclination of the eccentric orbit has continued to shift so the secondary is finally being occulted by the primary:

Updated O-C plot for the eclipses. The blue plots are the newly visible secondary eclipses:

You can track these stars at the Planet Hunters Talk thread here, here, here and here.
By Thomas Lee Jacobs - September 02, 2012 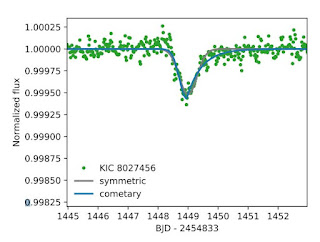